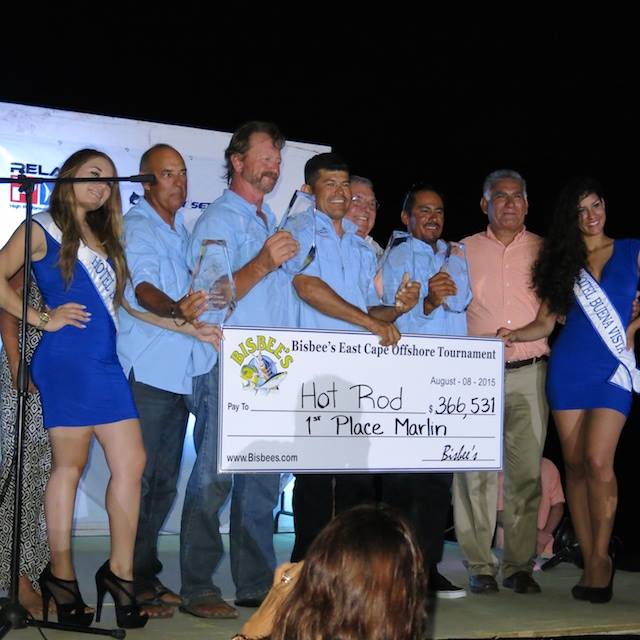 Tragedy at the East Cape Bisbee:  It wasn’t widely publicized, but the recent East Cape Bisbee ended on a tragic note for team Ardilla Ciega (Blind Squirrel).  The sixty-one boat event enjoyed active fishing but still no qualifying marlin had come to the scale at the start of the third and final day.  Fifty-three year old Andy Wickward worked aboard the well known 72 f Donzi sport fisher, Tiger Spirit as the engineer and was no stranger to tournament fishing as this impressive boat is always at the starting line in all the tournaments.  This year though Andy wanted to fish the Bisbee his way on his own boat, he wanted to prove it’s not about the size of the boat; he could win this, on his boat, his way.  He and teammates Gregorio Liera and Sergio Cota left Cabo and made their way up to the East Cape with his 22 ft. panga Ardilla Ciega and were out there fishing the tournament under blazing hot skies.

They finally hooked up a nice black marlin, definitely a qualifier.  Andy managed to get the fish to the boat and was surely ecstatic, no qualifying fish had been caught;  they were going to win the Bisbee’s; a dream fulfilled!  Just after the mate had gaffed the fish, they turned to see Andy slumped over and unresponsive.  Gregorio & Sergio, tried to revive him, but to no avail.  It appeared he had suffered a massive heart attack.  It was a very subdued Ardilla Ciega team that made their way back to the event site.  The organizers had been informed ahead of time by radio of what had happened and sensitively had an area cordoned off & tented, away from the main area, as Andy was brought ashore.  Andy died doing what he had loved and believing that he had won the tournament; you could see how devastated the team members were as they held up a photo of Andy fishing, accepting the award with the team captain absent from the stage.  Our condolences go out to Andy’s family, teammates and friends. The fish however, did not end up being the winner – not long after this black marlin was boated angler John Peelman landed a 409 lb. blue marlin aboard his vessel Hot Rod which netted his team $366,531.00.  Hot Rod, a 40 ft. Cabo Flybridge is now available for charter through Pisces Sportfishing.