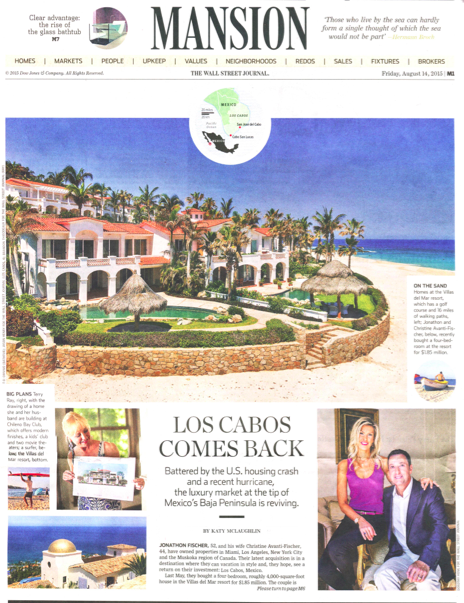 A recent article that appeared in the Wall Street Journal, written by Katy McLaughlin, was titled “Luxury Real Estate in Los Cabos is Back.” We found the article very interesting and bang on track confirming what we already know, substantiated by what we see happening around us. We are sharing the article with you here and are thrilled that long- time friends and Pisces Real Estate Clients, Fred & Diane Hearn were featured in the article.

After riding a wave of success, the economic downtown in 2008 caused a crisis in the real estate market of Cabo San Lucas as well as around the world as Katy mentions in her article. Even so, the Los Cabos area began making a slow but steady comeback until we were slammed with the devastation of Hurricane Odile, in September of 2014, which brought practically all construction and development to a grinding halt. The first step after this natural disaster was for local business and developments to recover before picking up and continuing forward. Now, almost a year on, you cannot notice a hurricane ever took place here, and many new developments are in full swing – Los Cabos is back, stronger than ever. As you drive along the main highway between San Jose and Cabo San Lucas you cannot help but be aware of the amount of development going on. What was previously an empty lot or abandoned construction site is now a hotel site or residential development; Nobu Hotels, Montage Maravilla, VieVage, Chileno Bay Cabo, are some of the projects currently underway.

In San Jos? del Cabo in the Puerto Los Cabos area and beyond, there are several new hotels and developments including Marriott, Ritz Carlton and Secrets. On the Pacific side, the oceanfront golf & residential developments of Quivira & Diamante Los Cabos continue to build.

Take a look at the article; we are encouraged to see that this important publication is giving Cabo the recognition it deserves and that savvy buyers know that the market is on the way up, making now the time to buy.

Remember that Pisces Real Estate specializes in high-end real estate, representing buyers in the purchase of luxury beachfront and golf developments like VieVage, Chileno Bay, Montage Maravilla Los Cabos, Palmilla, Cabo del Sol and others.  It’s always best to have a knowledgeable agent representing you that will look out for your best interests, rather than the developers. Having a successful track record in Cabo that spans over 35 years ensures that you will be in safe hands and your investment protected.

Luxury Real Estate in Los Cabos Is Back

Battered by the U.S. housing crash and a recent hurricane, the luxury market at the tip of Mexico’s Baja Peninsula is reviving – The Wall Street Journal

Jonathon Fischer, 52, and his wife Christine Avanti-Fischer, 44, have owned properties in Miami, Los Angeles, New York City and the Muskoka region of Canada.  Their latest acquisition is in a destination where they can vacation in style and, they hope, see a return on their investment: Los Cabos, Mexico.

Last May, they bought a four-bedroom, roughly 4,000-square-foot house in the Villas del Mar resort for $1.85 million.  The couple is now spending between $1.5 million and $2 million to add about 1,000 square feet and “renovate every square inch to make it modern,” said Mr. Fischer, a venture-capital investor.

“What intrigued us about the peninsula was that they had this concentration of really nice resorts and hotels and a surprising amount of activities in a small area,” Mr. Fischer said.  Created about 20 years ago, Villas del Mar has a golf course, 16 miles of walking paths and property managers who pay owners’ bills and grocery shop for them.

But today, the recovery in U.S. luxury-home prices, particularly in California, is driving a post-hurricane revival in Los Cabos.  A change in government and subsequent reduction in drug-related homicide helped reduce fears about violence in Mexico overall; Los Cabos has remained a relatively safe and low-crime area.

Developers of some of the world’s most luxurious resorts are moving in, while resort concepts that have been stalled for years are back to building.  Sales reported to multiple listing services were up 18% in 2014 compared with the year prior, despite the hurricane, said Carol Billups, owner of Cabo Realty Pros.

Los Cabos, also known simply as Cabo, lies at the southern tip of Mexico’s Baja California peninsula.  It consists of two towns-Cabo San Lucas to the west and San Jos? del Cabo to the east-and a 20-mile corridor between them, where most of the beaches, resorts and high-end residential developments are located.  Until the 1980s, the area was mainly undeveloped desert and fishing villages.  Then, drawn by sport fishing, golf and nearly year-round sunshine, U.S. and Canadian visitors helped build the area’s current tourist-oriented economy.

Ms. Billups said that before the bust, her average sale was a $2 million property, but that transactions stalled so badly she revamped her company to serve retirees buying $300,000 to $500,000 homes. This fall, she will begin aiming for the luxury vacation market again, she said.  Christie’s International Real Estate discontinued its relationship with a Christie’s affiliate in Los Cabos five years ago, but is currently searching for a new partner in the area, said Senior Vice President Zackary Wright.

Ohana Real Estate Investors, the group behind Hanalei Plantation Resort in Hawaii and the Montage Beverly Hills, began selling properties at its new resort, Maravilla, last year.  The community includes family-friendly amenities such as a two-story climbing wall, an 18-hole putting course and a kids’ activity center that will include educational programming on the local habitat and history.  Empty oceanfront lots cost between $5 million and $10 million.  Condos and townhouses, the first of which were completed last year, also cost between $5 million and $10 million, said Director of Residential Real Estate Neil Johnson.

Sales have been brisk, said Mr. Johnson, despite the fact that Maravilla has thus far spent little money on marketing.  Mr. Johnson said that instead of advertising, the company is taking a careful “word-of-mouth” approach to finding buyers, and will turn away those deemed unworthy.  “We don’t want to have anybody who is not a good person or has a questionable background or ethics,” he said.  “We don’t want people snapping pictures of people out by the pool, or to point out specific units and say, ‘that’s where so and so lives.'”

Chileno Bay Club, a 1,200-acre area with 2 miles of beachfront on Chileno Bay, where development has started and stopped for years, has already sold $50 million worth of property since launching a year ago, said Mr. Snell, a former brokerage owner who is now director of development for Chileno Bay Club.

Like Maravilla, Chileno Bay Club is eschewing a traditional Mexican look for modern lines and finishes.  It will also have a kids’ club with a burger restaurant and videogame room, two movie theaters, an 18-hole, Tom Fazio-designed, members-only golf course and a network of bike paths.  The modern design was a draw for Joel and Terry Ray from Dallas.  The couple bought a four-bedroom house for $2.3 million in Villas del Mar two years ago, and spent an additional $300,000 to $500,000 to modernize the interior, Mr. Ray said.  They now plan to list that property for about $3 million, after they build a five-bedroom house in Chileno Bay Club.  They start construction this fall.

“One of the things that attracted me was that we could custom-build our own home and we’re right on the water,” said Mr. Ray, 63, who owns a company that provides medical benefits.  Mr. Ray said the fact that Chileno Bay Club houses have solar panels is also a big draw, because he can sell energy back to the grid when they are not in the home, reducing energy costs.

Construction-whether buyers use their own architect or ask the developer to build the house-is additional, and costs roughly $500 a square foot, Mr. Michonski said.  Chileno Point Villas, the type of oceanfront home the developer is building for the Rays, cost $6 million to $10 million for both the land and construction. Mr. Ray declined to say what he paid.

Developers and real-estate agents say that the typical buyers 10 to 20 years ago were retirement-age couples looking to get away from it all.  Today, by contrast, there are more young families and more retirees who are catering to the needs of their children and grandchildren.  “In the olden days it was two guys with a fishing cabin raising hell,” said Mr. Snell.  Today, “the profile of our buyer has become more family oriented.”

“We’re building more meeting places, a club house, places where people sit together, places to watch a movie together at night,” said developer Mark Cooley of SV Capital, based in Englewood, Colorado.

That appealed to Fred Hearn, a property developer in Vacaville, Calif. Mr. Hearn, 61, and his wife Diane, 59, have been vacationing in Los Cabos for over 30 years, and own a condominium within walking distance to Cabo San Lucas, where “there’s always a party,” said Mr. Hearn.  But in March, they put a deposit on a four-bedroom condo at VieVage.  “We did it more to have the grandkids down and be in a safe environment for them,” said Mr. Hearn.  The fact that VieVage will be managed by Auberge Resorts Collection, a high-end resort company, was also a draw, said Mr. Hearn, who said he is familiar with Auberge from their resort in the California wine country.  “We got involved prior to having anything in the ground,” said Mr. Hearn. “It was a leap of faith.” 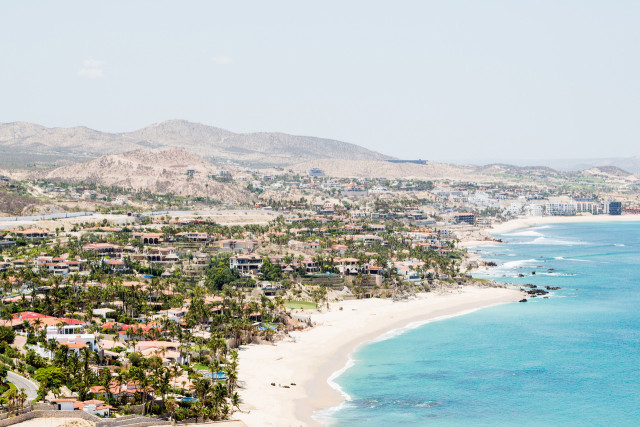